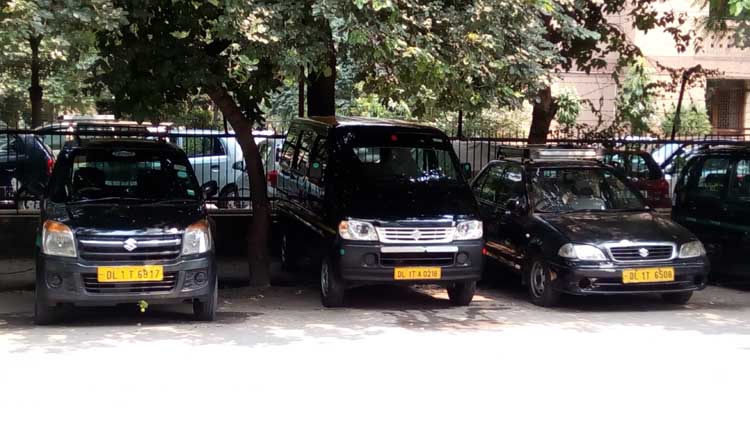 New Delhi– The age-old proverb “old is gold” may not hold true for traditional black-yellow taxis any more, given the people’s increasing preference for app-based cab services for intra-city movements.

And, why not? After all, who would not opt for a service that comes cheaper and at less waiting time.

In an age of technology, when almost every sphere of human activity is touched by high-tech gadgets and gizmos, making things faster at lesser cost, people going for cab aggregation apps does not come as a surprise. Change is the rule of nature, and the change is here, in the form of Ola, Uber and many more lesser known online cab aggregators.

Today, Ola has captured over 75 per cent of the taxi market share in the metros. It has nearly 250,000 cars linked to its online app across over 100 cities in the country, leaving little room for the traditional “kaali-peeli” (black and yellow) taxis.

In Delhi-NCR alone, there are over 80,000 cabs operating with the app-based taxi companies, while the number of traditional taxis stands at a meagre 7,000, approximately. That says it all.

Most of the “kaali-peeli” taxi stands across the city wear a deserted look, with vehicles lined up and awaiting their turn on a call from passengers. Drivers can easily be found dozing off in the adjacent rest rooms for want of taxi-seekers.

“I have been in this business since 1989 and have eight vehicles with me. But ever since the emergence of these private cab aggregators, our business has been badly hit,” Jaspal Singh, 58, owner of Sant Longwal Taxi Service in east Delhi’s Mayur Vihar area, told IANS.

Jaspal pointed out that against the government-fixed rate of Rs 12 per kilometre, the cab aggregators ply at Rs 6 per kilometre — and it is this disparity in rates that has dealt a body blow to their business.

He alleged that the government is hand in glove with the cab aggregators. “The government has asked the private cabs to put meters in their vehicles, but that is being violated every day, and it has failed to act against those violating rules with impunity.

Dilip, a “kaali-peeli” driver, said that earlier, they would get at least four to five customers every day, but now they have to keep waiting for even a single call.

But what is it that made the people switch loyalties so fast?

“Well, it is solely because of refusals by the taxi drivers, fleecing by a section of them and security concerns that have gone against the ‘kaali-peelis’ and for the cab aggregators,” said Arindam Choudhury, a Kolkata commuter.

Today, not more than 27,000 traditional taxis are left on the roads of the ‘City of Joy’.

“You call out five taxis and they refuse, the sixth one does agree, but demands Rs 30 to Rs 50 extra. So, the best option is to go for the cab aggregators, especially when you are travelling late at night, as GPS devices fitted to their vehicles give a sense of security,” said another commuter, Pratyush Singh, a 30-year old bank employee.

However, following repeated pleas to address their concerns, the West Bengal government has come out with a notification, stating that Kolkata’s all-yellow taditional cabs will be GPS enabled and can be booked through mobile phone apps, which will also be connected to the police headquarters. Just like the new-age cabs, these taxis will also have an emergency button, closed-circuit TV cameras and the like.

One can expect the new-look services ahead of next month’s Durga Puja festival.

Mumbai is another major city that has been taxi-dependent since long for last-mile connectivity. While previously the traditional “kaali-peeli” cabs were the sole option, now those are under severe pressure from the cab aggregators.

“In barely one-and-a-half years, we have lost 60 per cent of our business to them,” bemoaned Bombay Taximen’s Union General Secretary A.L. Quadros. “The ‘kaali-peelis’ have been badly hit, as customers now prefer the app-based or on-call cabs.”

“In 1997, when the Maharashtra government had frozen fresh permits for the black-yellow cabs, there were 63,000 plying in Mumbai, which had a population of nine million. After 20 years, only 40,000 black-yellow cabs are there though the city’s population has touched a whopping 16 million,” Quadros pointed out.

“In line with the court orders, the authorities must fix a uniform minimum-maximum rate for all cabs, which will help us get back our customers,” Quadros said.

Similarly, the entry of autorickshaws in large numbers in Chennai several decades back forced the black-yellow taxis out of the city roads by serving the inbound travellers at Chennai airport, and Central and Egmore railway stations. But the entry of radio taxis or ‘call taxis’, like FastTrack, Ola and others, have virtually sounded a death knell for them, according to G. Kannan, Joint Secretary, Chennai Airport Pre-paid Taxi Owner-Driver Association.

On the reasons for the loss of customers, though he did not rule out the cost factor, he also stressed that the customer preference is fast changing now. “Many commuters do not like to be seen in the black-yellow vehicles,” Kannan said, adding that perhaps travelling in app-based taxis looks more “hep” these days. (IANS)