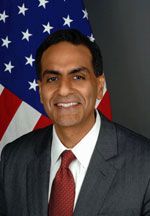 New Delhi– US Ambassador to India Richard R. Verma on Tuesday said that by 2030, India will lead the world in key categories, including by becoming the third largest economy.

“The great promise in our (India-US) partnership lies not only in our work together, but also in India’s rising influence and confidence on the global stage, which of course is generated from strength here at home,” Verma, who is of Indian origin, said while delivering the 17th Annual Justice Bodh Raj Sawhney Memorial Trust Oration at the National Law University here.

“By 2030 – less than 15 years from now – India will lead the world in key categories: it will be the most populous nation, with the largest middle class, the largest number of college graduates, the third largest economy, the most patent holders, and most mega-cities,” he said speaking on the theme of “Advancing our Shared Values”.

“You will lead the world in internet and smart phone users. Development and infrastructure growth will be phenomenal, just imagine how much will change given that two-thirds of the infrastructure and cities of modern India are yet to be built”.

Speaking on India-US ties, he said that the relationship has been “on a strong trajectory for the past decade, has made great strides in the past two years in particular”.

“Our two leaders, Prime Minister (Narendra) Modi and (US) President (Barack) Obama have met eight times, including last week in China and then again in Laos,” he stated.

“We have well over 100 initiatives that were launched in three big bilateral summits and there are nearly 40 government-to-government working groups that meet regularly on everything from global health and defense to cyber security.”

Citing the reasons for the growth in ties between the two sides, one was the “certain chemistry between our two leaders, that’s for sure”.

“Second, so many people of goodwill have been working on this relationship for decades – and it’s their hard work that has begun to pay off,” the Ambassador said.

“And, third, our people-to-people ties have only grown stronger – there are now some three million Americans of Indian descent in the United States. They serve as a natural bridge for so much of what we do.”

Verma described the Indian Constitution as a document that is the foundation for the shared values between India and the US.

“The American and Indian Constitutions start with the same three words “we the people,” he said.

“We are governed by the rule of law, by the people and for the people. We have complex systems for checking and balancing government excess,” he said.

He said both countries hold free and fair elections, both have federal systems, with strong and diverse states, with shared power between the central and state governments, both have bicameral parliaments, and the exceptional militaries of both countries are overseen by civilians.

“We do not share these values with every other country. As we know, not all countries choose democracy, inclusiveness, equal rights or free elections,” the Ambassador said.

“Therefore, these are the roots of a special bond we share with India. The United States set out on this democratic path 240 years ago, while India shed its colonial rule some 70 years ago.”

He said that when Obama visited India in January of 2015 as the chief guest for Republic Day celebrations, the US and India made their views clear in a joint agreement reached on the Indian Ocean and Asia Pacific.

“It was not a long or complex document – it stands at just a bit more than a single page,” Verma said.

“But its brevity belies the historic nature of the enterprise on which the United States and India agreed to embark together.”

The Ambassador said that India’s rise not only presented opportunities for India, but can shape a brighter future for Asia and beyond.

“That is why the United States unabashedly supports India’s rise as a great power on the world stage,” he said.