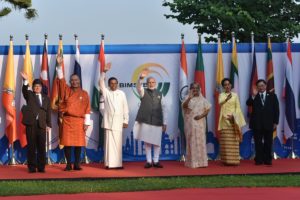 “India hosted the first BRICS Trade Fair in New Delhi two days ago with active participation from all your countries. Such activities must be promoted to generate greater business awareness and commercial exchanges,” the Prime Minister said.

“Our business communities are the strongest proponents for closer and faster commercial cooperation among BRICS. It is encouraging to see the BRICS Business Council take healthy shape three years after we set it up in Durban,” he added.

The BRICS Business Council Report was also presented on the occasion.

India is the chair of BRICS this year. New Delhi is hosting the ongoing summit here and the series of related events across the country.

In its report, the BRICS Business Council has recommended to the member countries to continue dialogue for a new rating agency for emerging economies.

Besides, with a huge scope for intra-BRICS cooperation in infrastructure development and financing, the formation of a group of angel investors was also one of the key recommendations of the council.

The council said they looked upon the BRICS New Development Bank for developing an infrastructure project preparation facility and for a deep and vibrant capital market.

With the expansion of the BRICS agenda, the council also emphasised on the need to enhance business cooperation in agriculture by way of sharing of best practices among members.

At the BRICS engagements in India, there have been calls to push up intra-BRICS trade as it is currently at less than five per cent of their global trade.

Addressing the BRICS leaders plenary here on Sunday, Modi urged the member countries to aim to double the intra-group trade to $500 billion by 2020. (IANS)