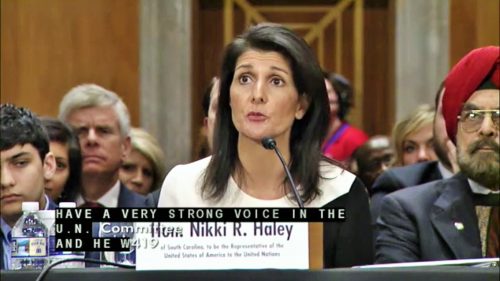 Washington– The US Senate has confirmed Nikki Haley to the cabinet-level position of ambassador to the UN, marking a major milestone in Indian American ascendancy in US politics.

Haley, who has said she would work to reform the UN, was nominated to the position by President Donald Trump and won the support of an overwhelming Senate majority cutting across the political divide on Tuesday.

She got 96 votes with only four diehard Democrats voting against her.

The post of the US ambassador to the UN is considered the second highest-profile diplomatic job after the Secretary of State and requires Senate approval.

The historic Senate approval for the first Indian American to hold a cabinet-level position came a few hours after Prime Minister Narendra Modi and Trump had a telephonic conversation.

Before the vote, Ben Cardin, a senior Democrat on the Senate Foreign Relations Committee (SFRC), said Haley represents the best in the American story of immigration.

The daughter of Indian immigrants in South Carolina, she faced discrimination as a child but overcame it, rising to become the Governor of the state, he said.

Haley has no diplomatic or foreign policy experience. Chris Coons, one of the four Democrats to oppose her, said he was against her appointment because she lacked the “high level of expertise on international affairs”.

Cardin countered this by saying that she had the skills to persuade others and build coalitions, an asset to further US policies and interests at the UN.

He was impressed by her performance as Governor in dealing with a tragedy when a white racist killed nine African Americans in a church and in bringing the state together to agree to take down the Confederate flag, a symbol of racism and slavery, in its capital.

Bob Corker, the Republican chairman of SFRC, said she was a “fierce advocate” for US values and interests and had the right instincts for the job.

At her confirmation hearings last week, Haley had spoken about her achievements in negotiating with corporate leaders to get businesses to invest in her state.

One of her successes was getting Boeing to set up an aircraft factory in the state.

She took a hard line against Russia, a position that puts her at odds with Trump. She said she would not hesitate to challenge Trump in the cabinet, a statement that endeared her to the Democrats.

She also spoke of her immigrant parents and her struggle as an Indian American child in racially polarized South Carolina.

Her father, Ajit Singh Randhwa, wearing a red turban, sat proudly behind her during the hearings.

While a student, she worked as an accountant in her mother’s import business.

Her husband, Michael, served in the US military in Afghanistan. They have a son and a daughter.

Although she converted to Christianity when she got married, she has continued to attend Sikh religious ceremonies.

She and her husband visited the Golden Temple in Amritsar while she was on a business visit to India in 2014.

A rising star of the Republican Party, Haley, 44, has had an impressive career.

In 2010, she became the first woman to be elected Governor of the conservative southern state and the second Indian American, after Bobby Jindal, to hold the position.

During her election campaign, she overcame vicious personal attacks and impressed the state with her conservative but compassionate ideas.

She criticized Trump during his election campaign for what she said were his negative views about immigrants. However, Trump reached out to her after the election and offered her the ambassadorship. (IANS)

Kerala IT panel to hold networking sessions in US

It is a moral imperative to get more women into tech: Pichai