New Delhi– China’s growing imprint through building of infrastructure projects in South Asian countries is proving to be “not so useful” for them and New Delhi is finding “cold comfort” in the fact that China’s aid was being relooked at by many of India’s neighbours, the government has told a parliamentary panel.

According to a report by the Parliamentary Committee on External Affairs, headed by Congress MP Shashi Tharoor, the panel was informed by the government that “experiences” with Chinese infrastructure projects in neighbouring countries like Bangladesh, Myanmar and Sri Lanka were leading these countries to give “at least some pause for thought”. 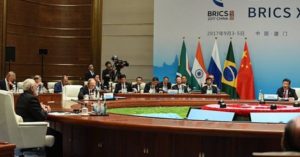 In “oral evidence” to the panel on February 16, Foreign Secretary Vijay Gokhale said that China had been a “net exporter of capital infrastructure technology in last five years”. China has said for many years that it did not intend to do this because it was very typically a Cold-War construct which the Americans had done, Gokhale pointed out.

“The logistics base at Djibouti is the first one where Chinese President Xi Jinping, wearing combat fatigues, addressed the soldiers in October, thereby removing even the veil of some ambiguity whether or not this is a military base,” Gokhale said.

He said China has begun a number of projects in every South Asian country with substantial commitments. “The experience has been that while initially the appearance of free money or cheap money as well as quick execution of projects — which we have to admit is very much a part of the Chinese modalities — was attractive to a number of these countries… there have been some experiences in some of our neighbouring countries which are now giving at least some pause for thought,” he said.

Giving examples, he said it was generally accepted that Hambantota port, for instance, had proved to be an “economic burden” for the Sri Lankan government. “In case of Bangladesh, the general sense we got is that President Xi committed $23 billion when he went an official visit two years ago, but it now transpires that a large amount of this money is actually commercial credit and at interest rates which are comparable to international commercial interest rates, but they are also insisting on buying Chinese equipment rather than tendering on international basis,” he said.

Similarly, in Myanmar, there had been some rethinking on the Kyauk Pyu — a deep sea port which was to be a part of China’s One Belt One Road initiative — because the sheer size of the port did not appear to be something that the Myanmar government was going to utilise.

“That is the cold comfort to us,” he said, adding that the Indian government’s aim was to try to build infrastructure projects which were of interest of the countries in our neighbourhood.

Gokhale also told the panel that India had raised concerns with China at the “highest level” about the proposed projects under the China Pakistan Economic Corridor (CPEC) in Pakistan-occupied Kashmir (PoK), and a constant vigil was being maintained.
During Xi’s visit to Pakistan in 2015, several bilateral cooperation agreements, including those on hydroelectric and nuclear projects, highways, motorways, ports, export processing zones, agriculture, and financial arrangements for projects were signed. Most of these agreements were for projects proposed under the CPEC, and some of the proposed projects were in PoK.

“Government’s consistent position is that Pakistan has been in illegal occupation of parts of the Indian state of Jammu and Kashmir since 1947. Government has conveyed to the Chinese side, including at the highest level, its concerns about their activities in PoK and asked them to cease these activities,” the report says.

“Government keeps a constant watch on all developments having a bearing on India’s security and takes all necessary measures to safeguard it”, the report quoted the foreign secretary as saying. (IANS)