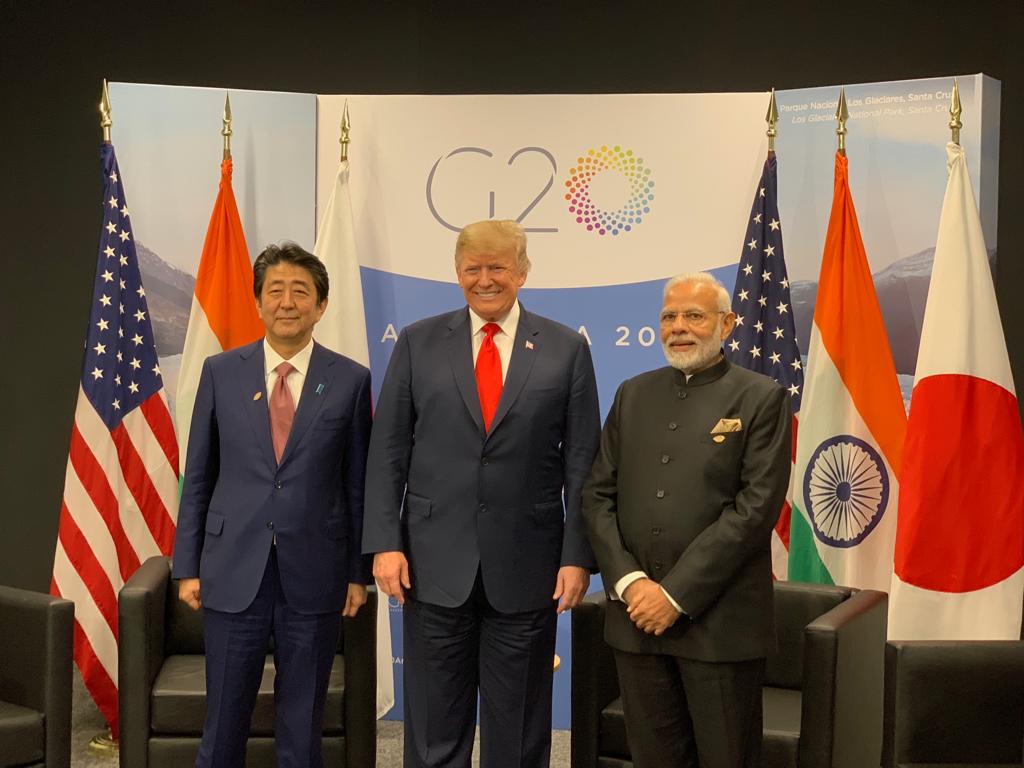 “If I put it differently, Japan, America and India is Jai. In Hindi, ‘Jai’ means success,” Modi said after the first-ever trilateral meet with US President Donald Trump and Japanese Prime Minister Shinzo Abe on the sidelines of the G-20 summit here.

“In a way, Jai (the trilateral meet) is a message of success and we are making a new beginning. Our arrangement I believe, will play a big role in promoting world peace and prosperity,” Modi said.

Modi said it was a “good occasion” as the three nations dedicated to democratic values met to discuss how to promote peace, prosperity and stability in the world.

“I am glad both US and Japan are our strategic partners. Both the leaders (Turmp and Abe) have been my good friends. It is a good opportunity to work together.

Briefing the media about the meeting Foreign Secretary Vijay Gokhale said that it was a “very warm meeting” and Trump and Abe complimented Prime Minister Modi for the “reforms and development that he has done”.

“The three leaders exchanged views on the Indo-Pacific. They all agreed that free, open, inclusive and rules-based order is essential for the regional peace and prosperity. The Prime Minister offered some ideas on how we should take forward on the concept of Indo-Pacific and how the three countries can work together to promote this concept,” Gokhale said.

He said that Modi felt it was necessary that the three countries reach out to all the stakeholders to explain the benefits of Indo-Pacific strategy and their advantages to these countries.

“The leaders also agreed to the central role of Asean and they also agreed to work on maritime and connectivity issues and to synergise efforts in this regard,” Gokhale said.

He said that the three leaders felt that such meetings were useful and they should continue on the margins of subsequent G-20 meetings.

“Overall, there was a very positive atmosphere and the outcome of this first trilateral has been very encouraging. Prime Minister Modi and the other two leaders were pleased with this outcome,” Gokhale added.

Earlier, making an intervention at the first session of the G-20 meet on global economy, future of work and women’s empowerment, Modi highlighted some of the flagship programmes of his government undertaken to modernise economy and promote inclusive growth, such as Jan Dhan Yojana, MUDRA Yojana and Start-up India. (IANS)