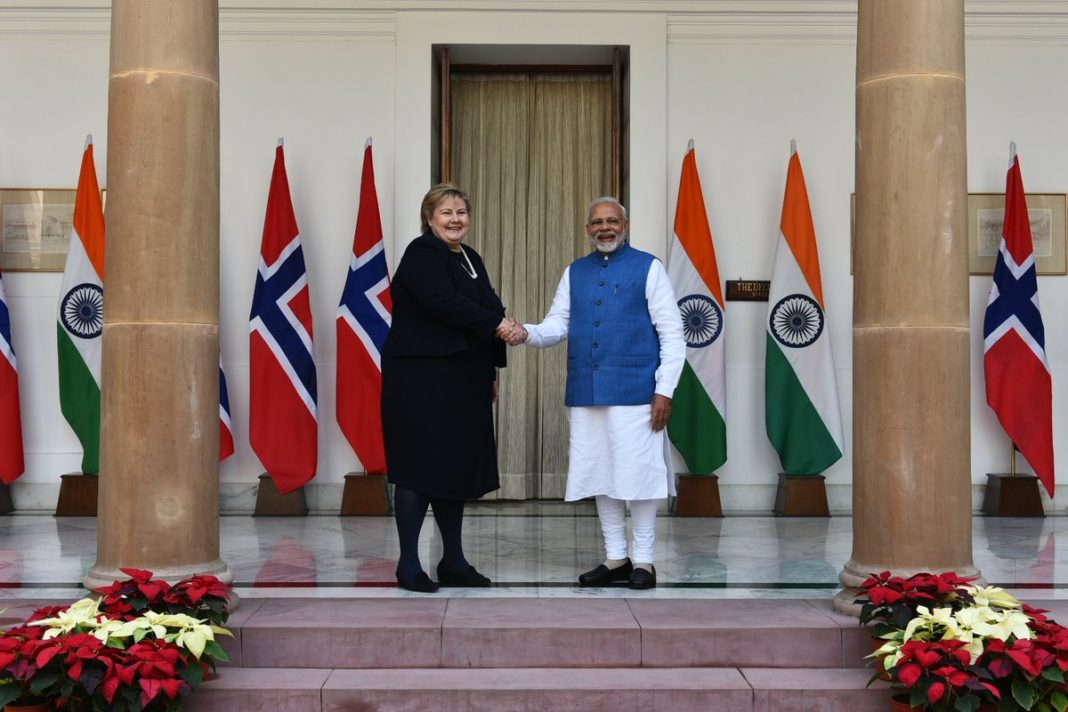 “The Sustainable Development Goals match India’s growth targets,” Modi said in a joint address to the media with Solberg following the meeting.

“And it is a matter of happiness for us that both countries are cooperating with the Norway-India Partnership Initiative on the issue of mother and child health,” he said,

Referring to Solberg inaugurating Norway’s new green Embassy here on Monday, he said that she has contributed significantly to global efforts to achieve the SDGs.

Modi also recalled his meeting with Solberg at the G20 Summit in 2017 during which the latter gifted him a football.

“It was not a football game goal, but a symbol of Sustainable Development Goals,” he said.

“Prime Minister Solberg has given a lot of encouragement to global efforts towards achieving Sustainable Development Goals.”

Stating that trade and investment form an important part of the India-Norway bilateral relationship, Modi said that Norway’s Government Pension Fund has made a portfolio investment of around $12 billion in India.

“I believe Norwegian companies will benefit from India’s immense potential in both portfolio investment and foreign direct investment in the days to come,” he said.

“Under the Sagarmala programme in particular, there are many opportunities for Norwegian companies in ship-building, ports and port-led development in India.”

Sagarmala is a programme for the comprehensive development of India’s coastline and maritime sector.

In this connection, Modi also stressed on the importance of the ocean economy for India.

Stating that 15 per cent of India’s population live in coastal areas, he said these people’s lives are directly linked to the ocean economy.

Referring to Norway’s immense experience in the ocean economy, he said that 70 per cent of that country’s exports is in the maritime industry.

He said that the agreement on bilateral ocean dialogue signed between the two sides following the talks will give new direction to cooperation in all sectors in this area.

Modi also said that India and Norway have strong cooperation at international fora.

“We work with close cooperation and coordination on issues like UN Security Council reforms, multilateral export control regimes and fighting terrorism,” he said.

On her part, Solberg said that the world will not be able to achieve the SDGs if India is not on board.

Referring to her personal interest in women’s empowerment, she said that India has been working hard in this area.

Solberg said both India and Norway have agreed to increase cooperation in ocean economy.

“It will create more jobs and more medicine,” she said.

She also said that both sides discussed cooperation in the areas of energy, climate change and environment.

This was the first meeting between Modi and Solberg after the first ever India-Nordic Summit in Stockholm, Sweden, in April last year.

Earlier in the day, Solberg was accorded a ceremonial welcome at the Rashtrapati Bhavan here.

External Affairs Minister Sushma Swaraj also called on the visiting dignitary during the course of which the two leaders discussed expanding bilateral cooperation across all areas.

Later on Tuesday, the Norwegian Prime Minister will also deliver the inaugural address at this year’s Raisina Dialogue, an annual multilateral conference that addresses the major issues facing the global community.

Solberg arrived here on Monday on her first visit to India. (IANS)