New York– The US dollar lost strength on Thursday after data showed a record surge in the number of Americans applying for jobless benefits due to the coronavirus outbreak.

US initial jobless claims, a rough way to measure layoffs, were registered at 3,283,000 in the week ending March 21, an increase of 3,001,000 from the previous week’s revised level, the Department of Labor reported on Thursday. The reading easily topped market consensus.

The dollar index, which measures the greenback against six major peers, decreased 1.67 per cent at 99.3761 in late trading. (IANS) 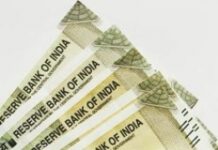