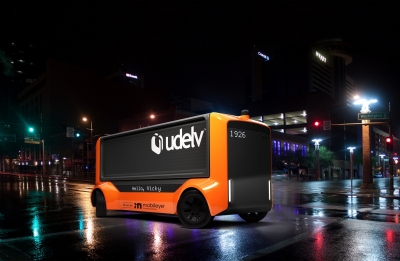 San Francisco– Intel-owned Mobileye and Udelv, a Silicon Valley venture-backed company, have announced to produce more than 35,000 autonomous vehicles by 2028, with commercial operations beginning in 2023.

“Our deal with Udelv is significant for its size, scope and rapid deployment timeline, demonstrating our ability to deliver Mobileye Drive for commercial use now and in volume,” said Professor Amnon Shashua, Mobileye president and CEO.

“COVID-19 has accelerated demand for autonomous goods delivery, and we are delighted to partner with Udelv to address this demand in the near term,” he said in statement on Monday.

Donlen, one of America’s largest commercial fleet management companies at the forefront of fleet management innovation and technology, has placed the first pre-order for 1,000 ‘Transporters’ — believed to be the largest to date for an autonomous delivery vehicle.

“The readiness of Mobileye Drive, along with its vast map coverage of North America, Europe and Asia, will allow us to ramp up the production and deployment of Udelv Transporters and rapidly offer the service at scale to our expanding list of customers,” said Daniel Laury, CEO and co-founder of Udelv.

Mobileye-driven Transporters will be capable of L4 self-driving, point-to-point operation.

Udelv’s proprietary tele-operations system will allow for the maneuvering of the vehicles at the edges of the mission, in parking lots, loading zones, apartment complexes and private roads. (IANS)

Zoom to roll out ‘automatic closed captioning’ for all free accounts