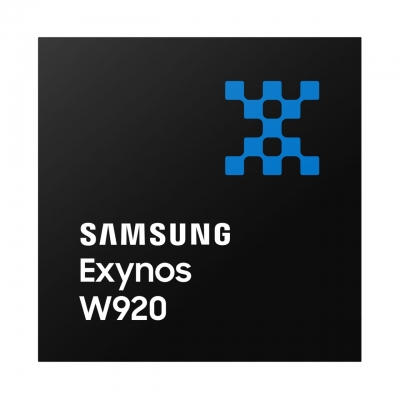 Seoul– Ahead of the launch of its new wearable devices at the Galaxy Unpacked event on August 11, South Korean tech giant Samsung on Tuesday announced its new wearable processor — the Exynos W920.

The new processor integrates an LTE modem and is the first in the industry to be built with an advanced 5-nanometer (nm) extreme ultra-violet (EUV) process node, offering a powerful yet efficient performance demanded by next-generation wearable devices.

“With the Exynos W920, future wearables will be able to run applications with visually appealing user interfaces and more responsive user experiences while keeping you connected on the go with fast LTE,” Harry Cho, vice president of System LSI marketing at Samsung Electronics, said in a statement.

The Exynos W920 packs two Arm Cortex-A55 cores for high-performing yet power-efficient processing and an Arm Mali-G68 GPU that boasts an improved CPU performance of around 20 percent and ten times better graphics performance than its predecessor.

Even with the latest features and enhancements, the Exynos W920 comes in the smallest package currently available in the market for wearables with Fan-Out Panel Level Packaging (FO-PLP), the company said.

For seamless connected experiences on the go, the Exynos W920 is embedded with a 4G LTE Cat.4 modem as well as a Global Navigation Satellite System (GNSS) L1 for tracking speed, distance and elevation during outdoor activities.

The Exynos W920 supports a new unified wearable platform Samsung built jointly with Google and will be first applied to the upcoming Galaxy Watch model. (IANS)