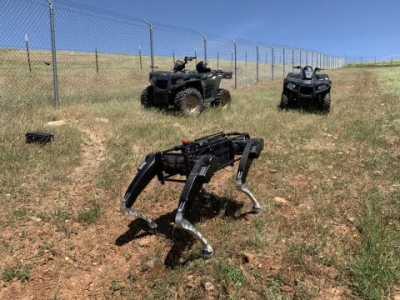 San Francisco– The US is testing quadrupedal robot dogs on its southern border to offer US Customs and Border Protection (CBP) a helping hand as the territory is vast and monitoring it is critical for the nation’s security.

The Department of Homeland Security (DHS) said that it can assist with enhancing the capabilities of CBP personnel, while simultaneously increasing their safety downrange.

“The southern border can be an inhospitable place for man and beast, and that is exactly why a machine may excel there,” the Science and Technology (S&T) Directorate programme manager, Brenda Long, said in a statement.

“This S&T-led initiative focuses on Automated Ground Surveillance Vehicles, or what we call ‘AGSVs’. Essentially, the AGSV programme is all about robot dogs,” Long added.

The American southwest is a region that blends a harsh landscape, temperature extremes, and various other non-environmental threats that can create dangerous obstacles for those who patrol the border.

The goal of the programme is to leverage technology to force-multiply the CBP presence, as well as reduce human exposure to life-threatening hazards.

With a deep understanding of CBP’s technology needs in the field, the Directorate, in its role as the research and development arm of the DHS, is always identifying solutions to support the complex CBP mission.