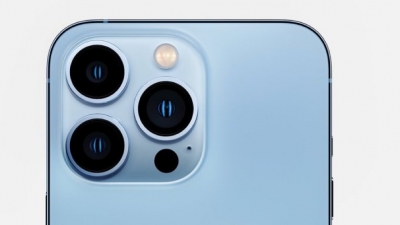 According to reputable Apple analyst Ming-Chi Kuo, the main reason for the larger and more prominent camera bump is due to upgrading the rear camera to 48MP, reports MacRumors.

He added that the diagonal length of the iPhone’s contact image sensor (CIS) is set to increase by to 25 to 35 per cent with the jump to 48MP.

Apple’s upcoming smartphone iPhone 14 Pro as well as 14 Pro Max are likely to feature a bigger hole-punch that will house the Face ID elements and a second hole for the selfie camera.

Display analyst Ross Young believes that Apple will expand it to the entire iPhone 15 lineup in 2023, bringing the updated look to even the lower-cost iPhone 15 options. As per Young, there is a chance the pill and holes could get smaller in 2023.

Meanwhile, 2022 Pro models would come with a big camera upgrade. Current Pro iPhones ship with a 12MP camera on board.

However, iPhone 14 Pro models will feature a 48MP camera. Apple has reportedly advised major US carriers to prepare for the launch of eSIM-only smartphones by September this year.

It is possible that Apple might remove the physical SIM card slot starting with some iPhone 14 models, rather than some iPhone 15 models as originally rumoured.

It is also said that there will be support for two eSIM cards, ensuring dual SIM functionality. The removal of the SIM card slot could further improve water resistance. (IANS)

India, US to discuss hike in US working visa fee at WTO