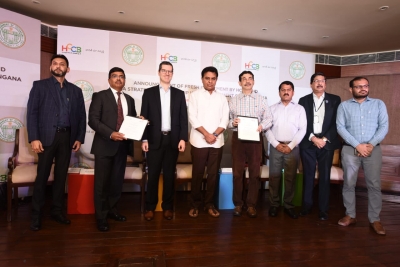 Hyderabad– Hindustan Coca-Cola Beverages (HCCB) on Thursday announced that it will set up a second factory in Telangana with an investment of Rs 1,000 crore.

The plant for carbonated beverages, juices and water will come up at Food Processing Park at Bandathimmapur in Siddipet district.

The company will invest Rs 600 crore in the plant in the first phase and another Rs 400 crore in the subsequent phases to take the total investment to Rs 1,000 crore in the next five years, said Telangana’s minister for industries K.T. Rama Rao at an event with the company leadership.

This will be the second bottling plant for HCCB in Telangana. This is expected to double the company’s manufacturing capacity to cater to the sales in the region for the next 10 years.

The state government has allotted 49 acres of land for the upcoming plant. The minister assured the company that they can go ahead with the construction without waiting for approvals under the state’s self-certification industrial policy.

KTR, as the minister is popularly known, said the plant would employ a lot of personnel. He hailed the company’s announcement that more than 50 per cent of the employees will be women. The company plans to commence operations by the end of 2023.

HCCB also signed a Memorandum of Understanding with the Telangana government for a long-term strategic partnership. Under the MoU, HCCB will help other industries in the state in water resource management, better management of solid waste and build skills among youth. To begin with, the company will train 10,000 youth in partnership with Telangana Academy of Skills and Knowledge (TASK). (IANS)

Higher fiscal deficit due to Budget being advanced, was expected: Chief Statistician