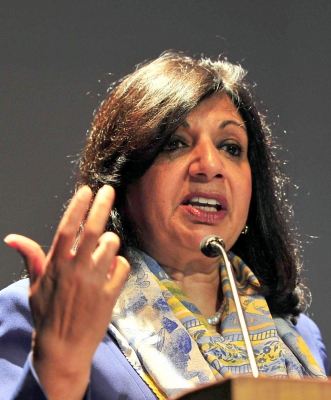 “Shocking and shameful”, said Kiran Majumdar-Shaw while commenting on a stretch of pothole-ridden roads in Bengaluru, known as the Silicon Valley of India.

She was reacting to the post shared by a photojournalist of an English daily with a video highlighting the condition of a road near Nice Road Junction on Bengaluru-Mysuru highway.

“Potholes on the road? Or road in between potholes?” asked the photojournalist who shared a video and the inconvenience being faced by vehicle riders while passing through this stretch.

“Welcome to the IT capital of India. Bengaluru-Mysuru Road near Nice Road Junction with multiple potholes making motorists difficult to use this stretch,” he said.

Kiran Majumdar-Shaw triggered a debate on Bengaluru infrastructure by her earlier outbursts regarding poor condition of roads. “Frustrated and angry at the total lack of responsibility of our MLA, Panchayat and MP of Anekal taluk and Huskur Gram Panchayat at the abominable condition of Huskur-Sarjapur Road,” she had stated.

“Why does the government build the bus depot and quarters with no road to support it?” Kiran Manjumdar-Shaw asked. She further vented her ire by saying “Shame on all the local politicians.”

The incessant rains have made the life of vehicle riders and pedestrians hell in Bengaluru. The arterial roads which are dug for various civic works are not being repaired. The potholes have resulted in deaths in Bengaluru, triggering public outrage.

Kiran Majumdar-Shaw had spoken about the pathetic condition of Bengaluru roads on earlier occasions also. Karnataka Chief Minister Basavaraj Bommai is giving deadlines for filling potholes in the city but, the authorities have miserably failed to ensure roads without potholes.

The state government is preparing to host the prestigious Global Investors Meet in the month of November. People are hoping that by then the roads will be fine.

The posts of Kiran Majumdar-Shaw have gone viral on social media and people are appreciating her concern and her courage to slam politicians and authorities.

Telagnana Minister K.T. Rama Rao had invited IT companies to shift to Hyderabad from Bengaluru assuring better infrastructure. His comment stirred controversy igniting debate in both the states. (IANS)