New Delhi– Even as the government has chosen to remain tight-lipped on the price bargain related to the purchase of Rafale fighter jets from France, the BJP on Wednesday announced on its official Facebook page that the deal has been finalised at $8.8 billion. 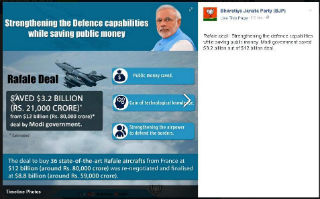 The defence ministry refused to comment on the figure.

“When the deal is finalised, an announcement will be made. We have never given out any figures (related to the deal),” said an official from the ministry.

A BJP leader, meanwhile, said the government version on the deal should be considered as accurate, and was unsure how the post was published.

On Tuesday, Minister of State for Defence Rao Inderjit Singh said most of the roadblocks in negotiations on the Rafale deal had been overcome and it was likely to go to the Defence Acquisition Council (DAC) soon.

Earlier, sources said the negotiations on pricing had almost concluded, and the deal would be final soon.

The defence ministry has not officially quoted any figure for the deal for the fighter aircraft, which is one of the most expensive in the world.

In January this year, both sides signed a Memorandum of Understanding (MoU) for the purchase during the visit of French President Francois Hollande to India. (IANS)