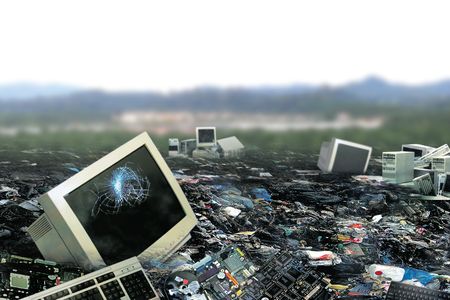 New Delhi– It can be toxic and hazardous to health. Yet, only a fraction of India’s e-waste is recycled, making the country its fifth largest generator in the world. Better awareness and proper implementation of e-waste norms alone can address the issue, experts maintain.

A series of studies led by Assocham reveal some disturbing facts.

An estimated 1.8 million tonnes of e-waste is generated in the country, and is likely to grow to 5.2 million tonnes by 2020 at the predicted annual compounded growth of 30 percent, says one of its reports with cKinetics, a consultancy on sustainable business based here and in Palo Alto.

“But the sad part is a mere 2.5 percent of India’s total e-waste gets recycled,” said another of the chamber’s study, in collaboration with Frost and Sullivan, attributing it mainly to poor laws and lack of adequate infrastructure.

“There are two reasons for the e-waste problem — people are not aware about e-waste, and they do not have solutions to this issue,” said Deepak Sethi, Chief Executive and Co-Founder of Delhi-based recycling company, Pompom.

“Worse, the waste that is segregated by the informal sector is either dumped or burnt, which is not the right thing to do,” Sethi told IANS. “It is dumped in dustbins or sold, which is wrong. We should make sure e-waste goes to the right channels — this is what needs to change.”

India does have what is called E-Waste Management and Handling Rules since May 2012, which has laid the onus of recycling on companies along with an extended producer responsibility to ensure their efficient and appropriate collection. But the role of consumers is unclear.

Why such emphasis? This is because e-waste can contains toxic substances such as lead, mercury, cadmium, gases and heavy metals, as also non-bio-degradbles like plastics, which are threats to both humans and the environment, if not handled properly.

Studies show that millions of people in India are involved in scavenging e-waste or in waste management, and because of the exposure to toxic material, 30 percent of their income goes towards medicines with a life expectancy of just 45 years.

Also, as a KPMG study points out, one segment alone needs better handling. With over one billion mobile phone subscribers, 12 percent of the e-waste is accounted for by the telecom sector. As 25 percent of the devices end up as e-waste each year, collection targets need to be put in place.

At the same time, Assocham has also said a system of feasible checks is needed and e-waste collection targets must be implemented in a phased manner with lower and practically achievable target limits.

The growing e-waste problem is compounded by increasing amount of e-waste dumping into India.

“But before looking at how we can curb the import of e-waste, it is important to understand why the e-waste is being exported from another country in the first place,” said Rohan Gupta, Chief Operating Officer of Attero Recycling that promotes reuse and recycling of electronics.

“In most cases, countries of origin do not have required recycling technologies,” he said, adding: “Since e-waste management rules, which prohibit import of e-waste, are already in place, the government must ensure stricter implementation of these laws to keep a tab on that.” (IANS)

Visteon to Cooperate with Tencent on Autonomous Driving and Intelligent Cockpit Solutions for Guangzhou...

India, US sign MoU for cooperation in traditional medicine