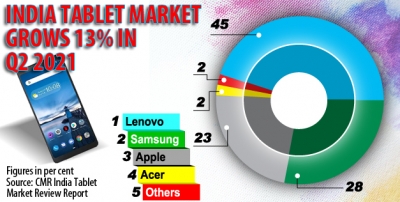 New Delhi– Riding on the surge in remote work, learning and fun activities at home during the pandemic, the overall tablet market in India grew by 13 per cent quarter-on-quarter and Lenovo maintained the top position, a report said on Tuesday.

“The Covid-19 pandemic impacted the Tablet market in India. Driven by regional lockdowns in the wake of the second pandemic wave, the tablet market declined in Q2 2021. However, tablet shipments revived in June,” CMR’s Industry Intelligence Group (IIG) Analyst Menka Kumari said in a statement.

Lenovo grew in the region and maintained the first place, mainly driven by work from home (WFH)and learning from home (LFH). The top models sold in Lenovo were M8 and M10 FHD Plus, primarily in the value for money (Rs 7,000-Rs 25,000) segment.

ICC partnership has been phenomenal for us: GoDaddy