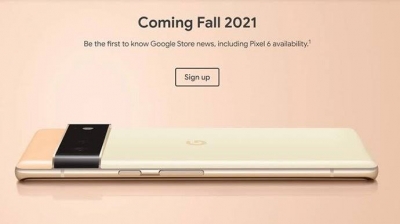 San Francisco– Google is planning to launch its Pixel 6 as well as Pixel 6 Pro smartphones in October this year, and now FCC documents have claimed that the Pixel 6 series will come with Wi-Fi 6E and ultra-wideband (UWB) support.

According to the United States Federal Communications Commission (FCC), the Google Pixel 6 series will come with a combination of Wi-Fi 6E, mmWave 5G, and Ultra-wideband (UWB) technology. The six Pixel 6 models spotted on the FCC listing are GLU0G, G9S9B, G8V0U, GF5KQ, GB7N6 and GR1YH, reports GizmoChina.

As per the report, mmWave 5G connectivity will be carrier-dependent, but all the models do have Wi-Fi 6E connectivity. Only three models have the UWB functionality, namely GLU0G, G8V0U, GF5KQ.

Google has been working on UWB support, a short-range wireless communication protocol that’s useful for precisely tracking the location of nearby objects.

The Pixel 6 Pro is tipped to feature a display panel with a resolution of 1,440×3,120 pixels and 120Hz refresh rate. The smartphone is expected to come preinstalled with a digital car key application, reports XDA Developers.

Under the hood, the smartphone will come with a Tensor chipset, paired with Mali-G78 GPU, up to 12GB of LPDDR5 RAM, and up to 512GB of storage.

There will be a 12MP Sony IMX663 front-facing camera for selfies and video calling. (IANS)

Amazon asks employees to work from home if they can