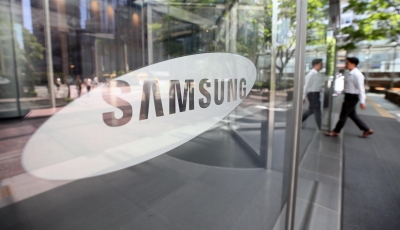 Seoul– Samsung Electronics on Tuesday said it has started mass production of the industry’s smallest 14-nanometre DRAM using extreme ultraviolet lithography technology as part of efforts to consolidate its leadership in the memory industry.

The company already shipped 1 million units of 10nm-class (D1x) DDR4 (Double Date Rate 4) DRAM modules that were produced with the technology in March last year for the first time in the industry.

The production will start with DDR5, the company said, adding that it expects the latest process to increase the productivity rate by 20 per cent and reduce power consumption by nearly 20 per cent, reports Yonhap news agency.

DDR5 is a next-generation DRAM standard that boasts fast speed and high density with reduced power consumption as compared to DDR4. It is optimized for use in data-intensive applications such as big data, artificial intelligence and machine learning.

Samsung recently announced that it will start producing customers’ first 3nm-based chip designs in the first half of 2022, while its second generation of 3nm is expected in 2023.

Compared with the 5nm process, the 3nm gate-all-around (GAA) node boosts performance by 30 per cent, lowers power consumption 50 per cent and takes up 35 per cent less space. (IANS)

Deloitte amongst ‘Top 10 Best Companies for Women in India’

Kerry highlights India as strategic partner of US