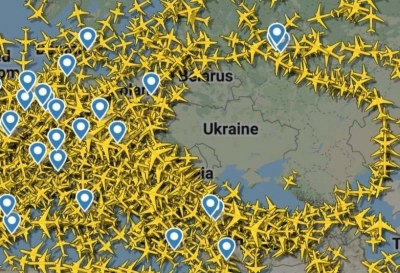 New Delhi– Flights from India to Western Europe and North American will not be impacted much due to the ongoing war between Russia and Ukraine.

At present, some India-based airlines, including Air India, operate flights to Europe and North America. But these flight operations do not use the conflicted airspace over Ukraine much.

Consequently, hardly any impact is expected to be witnessed on out-bound flights from India to Western Europe.

Besides, Air India will not operate its special flights to Kiev anymore after a NOTAM (Notice to Airmen) was issued about the closure of airspace over Ukraine.

According to industry sources, the airspace is closed for civilian traffic.

The development assumes significance as many Indian students and professionals are stranded in Ukraine.

The Indian Embassy has issued an advisory for students and citizens living in Ukraine, urging them not to move out and stay put wherever they are.

The Embassy has also asked the students and citizens in Kiev to stay in touch with the Embassy via its official social media handles.

Air India’s flight bound for Kiev from New Delhi on Thursday returned to the national capital’s IGI Airport after the NOTAM was announced at Kiev airport and airspace was closed over Ukraine. The flight had left Delhi at 7.30 a.m. only to return at 12.30 p.m.

On Tuesday, the airline had operated the first of its special flights ferrying Indian citizens from Ukraine.

Apart from Air India, other Indian operators were expected to start special flight services to Ukraine.

Last week, the Centre had removed the restrictions on the number of flights and seats between India and Ukraine, evidently to facilitate the return of Indian students and professionals stranded in the east European nation due to the ongoing tensions with Russia. (IANS)