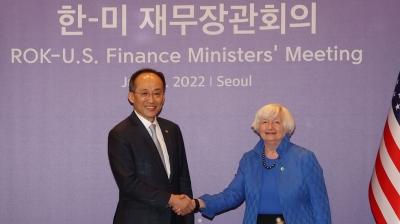 Seoul– South Korea and the United States agreed on Tuesday to implement liquidity facilities, if needed, as part of efforts to cooperate in stabilising the foreign exchange market.

The two sides “have the ability to implement various cooperative actions, such as liquidity facilities, if necessary,” the ministry said in a statement after the talks.

The move appears to leave open the possibility of opening a currency swap line between South Korea and the US, if needed.

South Korea’s US$60 billion currency swap line with the US expired at the end of last year. The Bank of Korea and the Federal Reserve signed the swap facility in March 2020 to ease market routs caused by the pandemic and had extended the deal three times.

Volatility in the financial market has heightened, as demand for the dollar increased due to the Fed’s aggressive monetary tightening. The won has slid more than 9 per cent against the US dollar so far this year.

Meanwhile, Yellen appreciated South Korea for expressing its intent to join the proposed price cap on Russian oil, according to the finance ministry.

The US has asked South Korea to join the price cap in a bid to help stabilise high energy prices and prevent Russia from funding its war chest with revenue from oil exports.

The finance chiefs agreed on the need to deepen economic cooperation and policy coordination between the two nations amid heightened economic uncertainty from the protracted war between Russian and Ukraine, and global monetary tightening drives.

Yellen arrived in South Korea late Monday for a three-day visit as part of her first trip to Asia that included stops in Japan and Indonesia. It marked the first visit by a US treasury secretary to South Korea since 2016.

Earlier in the day, she toured a research and development complex run by LG Group in western Seoul to call for building resilient supply chains with South Korea on semiconductors, batteries and other key materials. (IANS)