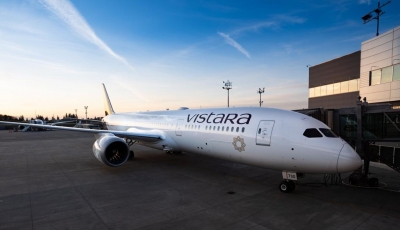 New Delhi— Vistara airline on Friday announced the addition of a new route to its international network with four weekly flights between Pune and Singapore, starting December .

The airline will operate its state-of-the-art A321neo aircraft with a three-class configuration on the route as it strengthens its existing connectivity between India and the ‘Lion City’. The airline also recently announced that it will fly daily between Mumbai and Kathmandu starting November 15, enabling convenient onward connections to popular international destinations like Dubai, Jeddah, Abu Dhabi and more.

Vinod Kannan, Chief Executive Officer, Vistara, said, “We are very excited to be able to launch the long-awaited connection between Pune and Singapore. Singapore is a key market for business and leisure travel from various points in India and we are glad that the new route will offer enhanced connectivity to our customers.

“We are also delighted to introduce another international route between Mumbai and Kathmandu thereby offering the customers the option to avail seamless connections beyond Mumbai across our domestic as well as international network. We continue to densify our network for the convenience of our customers and offer them the experience of flying with India’s best airline.”

TATA SIA Airlines Limited, known by the brand name Vistara, is a 51:49 joint venture between Tata Sons Private Limited and Singapore Airlines Limited (SIA). Vistara commenced its commercial operations on January 9, 2015, with an aim to set new standards in the aviation industry in India and currently it connects destinations across India and abroad. The airline has a fleet of 53 aircraft, including 41 Airbus A320, five Airbus A321neo, five Boeing 737-800NG and two Boeing 787-9 Dreamliner aircraft and has flown more than 35 million customers since starting operations. (IANS)