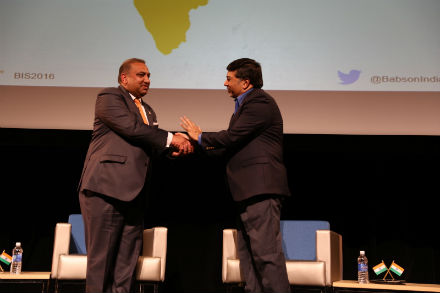 This year’s symposium provided a great platform for business leaders, entrepreneurs, and academicians to share their experiences on starting up and investing in India.

The range and selection of topics were diverse and varied interests of the audience were catered, organizers said.

The opening key-note by Rohan Murty of Catamaran Ventures/Infosys spoke about the influence of technology on the world, while the closing key-note by V.G Siddartha, CEO of Café Coffee Day, spoke about varied opportunities to pursue business ideas and how important it is to dream big.

In his key-note address, Vallabh Bhansali, Founder of Enam Securities, explored the idea of India becoming the next economic superpower, which was aptly followed by a fiery keynote from Laxman Narasimhan, CEO of PepsiCo Latin America. He spoke about how to understand the billion consumers which India offers.

The panel discussions included engaging topics such as conducting business within family businesses and starting up in India. The importance of value-driven and conscious work culture was exemplified by Karambir Kang, the hero of the terrorist attacks in Mumbai and a long-standing employee of the Taj Group of Hotels (TATA group). Stand-up comedian, Abish Mathews spoke about unconventional careers alluding to India truly being the land of opportunities.

The entire day was jam-packed with compellin

g topics and engaging discussions, and definitely drove the point that India is the next big destination, with immense potential and with a huge scope to scale up.

Challenges notwithstanding, India promises to provide enormous opportunities, and the student community at Babson promises to return next year with a bigger and a better edition of the India

India’s scheme to turn the deprived into entrepreneurs

US seizes $56 mn in crypto fraud, to pay victims in dollars