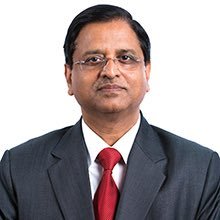 By Manish Gupta and Vishav

New Delhi–The Reserve Bank of Indias decision to cut lending rates goes beyond lowering the rates and gives a broad message that would impact the economy as a whole, says Economic Affairs Secretary Subhash Chandra Garg.

“As far as the impact is concerned, these rate decisions play into the economy in a very serious manner. It’s not just that there would be some reduction in loan rates or something. But it gives a very clear stance,” Garg told IANS in an interview.

He said the reduction in interest rates for loans would just be the immediate effect of the RBI’s decision and more symptomatic. However, the decision itself gives a broad message to the economy that the lower interest rates are justified.

The Reserve Bank of India (RBI) cut its key lending rate to commercial banks by 25 basis points to 6.25 per cent on Thursday. It is the first cut in one and a half years. The RBI also changed its stance from ‘calibrated tightening’ to ‘neutral’.

The RBI’s move is designed to ease the liquidity crunch, which had become a bone of contention between the government and the central bank earlier. Incumbent Shaktikanta Das replaced Urjit Patel as RBI Governor last December. Das presided over his first Monetary Policy Committee (MPC) meeting that brought in the rate cut.

“All the economic operators, borrowers, lenders take (RBI rate cut) into account, they reassess their costs. So, it plays into it. There are different transmission channels through which the monetary policy is passed on. This is more important,” Garg said.

He said the monetary policy affects the government borrowing rates, bond rates and plays into other implications like investments made by public and private sectors.

“Investment decisions are to some extent affected by the interest rates prevalent in the economy. Logically in a lower interest rate situation the investment should go up. However, there are many other factors and it is not one exclusive factor,” he said.

On whether he expected the easy monetary policy trend to continue for some time in the near future, he said all depends on the situation prevailing two months from now when the next bi-monthly MPC meeting will be held to review the rates.

On the interim dividend that the RBI is expected to transfer to the government, Garg said the bank’s central board will take a decision on it based on the profit it makes and on the needs of the bank before deciding the amount to be transferred.

As per the budget estimate for 2018-19, the government had assessed it may get Rs 68,000 crore from the RBI as its dividend of which it has already received Rs 40,000 crore. The RBI’s central board meeting is scheduled on February 18. (IANS)