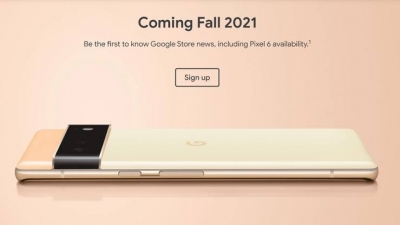 San Francisco– Google recently announced that it will be launching Pixel 6 series smartphones on October 19 and now a new report has claimed that the upcoming Pixel phones will get four major Android updates as well as five years of security patches after their official launch later this month.

According to GSMArena, the two Pixels launched in 2021 will be updated all the way up to Android 16 in 2025 and receive security updates until October 2026.

Currently, Google has not confirmed any details regarding the Pixel 6 series software support.

The devices will come with a 50MP Samsung GN1 main camera and a 12MP Sony IMX286 ultrawide camera. The Pro model will have a 48MP Sony IMX586 telephoto camera sensor with 4x zoom support.

For selfies, the vanilla Pixel 6 will have an 8MP sensor, whereas the Pro model will come with a 12mp Sony IMX663 sensor. The Pro model’s front camera will offer two zoom levels: 0.7x and 1x.

As per the report, the primary camera will likely support 4K video @ 60fps with a maximum zoom level at 7X. While recording at either 4K or FHD @ 60fps enabled zoom up to 20X.

The Pixel 6 Pro is tipped to feature a display panel with a resolution of 1,440×3,120 pixels and 120Hz refresh rate. The smartphone is expected to come preinstalled with a digital car key application.

Under the hood, the smartphone will come with a Tensor chipset, paired with Mali-G78 GPU, and up to 512GB of storage. (IANS)