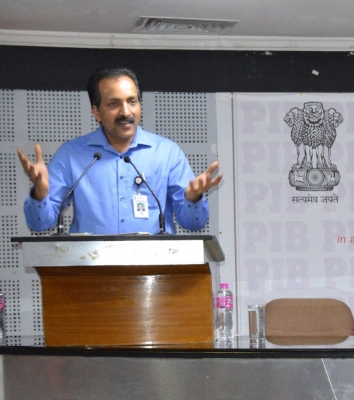 New Delhi/Chennai– India will start flying its rockets with satellites into space this year starting next month with the launch of its strategic radar imaging satellite RISAT-1A, ISRO Chairman S. Somanath said on Tuesday.

The Risat-1A satellite, weighing over 1,800 kg, is a repeat microwave remote sensing satellite of Risat-1 and is configured to ensure continuity of SAR in C-Band providing microwave data to the user community for operational services.

The satellite will play a strategic role in the nation’s defence with its capability to operate in day, night and all weather conditions with a mission life of five years.

The satellite has high data handling systems and high storage devices among other things.

An ISRO official had earlier said an earth observation satellite will send pictures which will be used by different agencies as per their needs.

The RISAT-1A flight will be followed by the launch of three satellites – OCEANSAT-3, INS-2B, ANAND- by PSLV-C53 in March and Micro SAT by the newly developed small rocket Small Satellite Launch Vehicle (SSLV) in April.

Further, the launch of four ton communication satellite GSAT-24 is also scheduled during the first quarter of this year using Ariane 5 rocket owned by Arianespace.

Updating about the status of human space mission Gaganyaan, Somanath told Singh that there had been a delay in timeline because of the Covid-19 and other constraints but now things have again fallen back on the track and all the systems needed for the first unmanned mission are getting realised.

The minister was also informed that the Indian astronauts have successfully undergone generic space flight training in Russia.

A dedicated ad-hoc astronaut training centre has also been established at Bengaluru for Gaganyan specific training.

The preparations for the human mission, said the ISRO cief, involve in-flight demonstration of Crew Escape System functioning in the lower atmosphere (less than 10 km). The exercise recovery of the crew module after impacting in sea is also being worked out. (IANS)