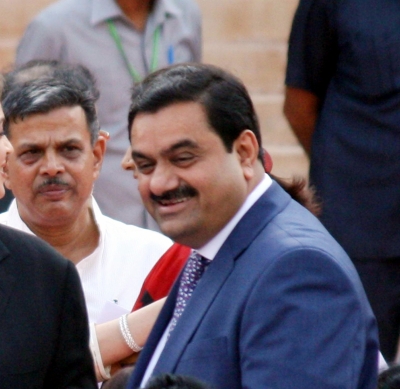 Chennai– The Adani Group’s announcement on entering the telecom sector seemed to have its impact on the shares of two other players – Bharti Airtel and Vodafone Idea – at bourses on Monday.

On Saturday, the Adani Group said it would enter the telecom sector and participate in the 5G spectrum auction to offer private network solutions but does not have the intention to venture into consumer mobility space.

However, brokerage houses/industry experts are not entirely buying that view.

“Adani’s intent to buy spectrum in upcoming auctions only for private use has uncanny similarities to Jio’s (Reliance Industries Ltd) purchase of 2300 MHz spectrum in 2010 that could not be used for voice services. Spectrum bought through auctions can be used to offer commercial services in the future by taking a Universal Access License,” financial services firm Jefferies said in a research report.

“In the past, telecom stocks have performed until revenue growth is strong but have derated closer to new entrants service launch,” it said.

According to Jefferies, enterprises can build private networks by applying for a Captive Non-Public Network (CNPN) license and seek direct spectrum assignment from the government for a period of 10 years.

They don’t have to pay entry or license fees. However, a CNPN licensee is not allowed to offer commercial services.

The CLSA, in its report, said Adani Group’s entry will create uncertainty over spectrum pricing in the 5G auctions.

“We await the confirmation of the final list of bidders on July 20, 2022 and believe RJio and Bharti Airtel are likely to lead the upcoming 5G auction,” it said.

On its part, BofA Securities India Ltd, in its report, said in the enterprise segment, there is space for a new telco because the millimetre wave (26GHz) spectrum is available and at a cheaper price.

“As the corporate market grows, there is opportunity for a new player to offer enterprise solutions, especially paired with a data centre offering. Hence apart from Adani, we are seeing interest from other parties also,” BofA Securities said.

When a company acquires pan-India spectrum, it would imply that the company is looking to target large enterprises also and could potentially showcase a good captive offering to gain more business, it said.

The success of the Adani Group in the telecom sector would be contingent on its execution or if it gets into a JV with an enterprise expert, the BofA added.

“Our talks with industry participants indicate that there is certainly a consumer bent within the (Adani) Group, which could extend beyond its existing FMCG-led offerings,” Motilal Oswal said.

With so many ifs and buts, clearly the answer to the Adani Group’s venture into the telecom space is not a binary one, it added. (IANS)